During the last year, SONSI member Celia Godkin has been working hard on the text and illustrations for a new children’s book about peregrine falcons. The book is about to be released by Pajama Press. An image of the cover and description of the book follow. Congratulations Celia! 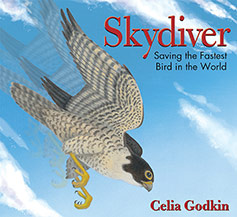 Skydiver: Saving the Fastest Bird in the World
By Celia Godkin

The inspiring story of how the peregrine falcon was saved from the brink of disaster.

High in the sky, a peregrine falcon joins her mate for some swooping and diving before returning to her nest to guard her eggs. The couple doesn’t know it yet, but they will lose most of these eggs; the first clutch to a volunteer scaling the cliff, and the next to the harmful effects of DDT. Told against the backdrop of scientists’ efforts to understand the raptors’ decline in the wild, this illustrated non-fiction book tells the story of several generations of falcons as they’re taken to a sanctuary, reintegrated into the wild, and ultimately relocated to the ledge of a city skyscraper.

With dynamic oil illustrations, author and wildlife artist Celia Godkin effortlessly captures the detail of the falcons and brings to life the different landscapes they inhabit. Skydiver will delight and inform readers with a passion for species preservation, as it documents the struggles and the eventual success of the efforts to save the fastest bird in the world.