At the Toronto Zoo

Regardless of your ethical standpoint on modern zoos I doubt that there are many who do not enjoy the giddy pleasure of seeing so many different species. SONSI members were not only able to enjoy this experience as a group but with a special behind-the-scenes tour arranged by SONSI member Lori Dunn who has worked with the Toronto Zoo, and features many creatures in her work such as her best in show entry “Watching You” at the recent SONSI exhibit in Kitchener. The tour was led very graciously by Tom Mason the Toronto Zoo’s curator of invertebrates and birds. 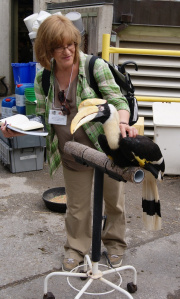 Members, adorned with official lanyards, followed Tom straight in to the Indo-Malayan area of the zoo, past the endearing Tapir and through a staff only gate. Not really knowing what to expect members were greeted by Brad, one of the zoo keepers, one of his charges is the Indian Rhinoceros. Members were casually led in to the rhinoceros enclosure and, after a little coaxing, the keeper began feeding the enormous male through a small wired fence while talking about him. Upon closer inspection (for many members this included petting the placated animal) would look more at home next to a giant fern and a triceratops. After the meal was over the Rhinoceros’s attentions were clearly drawn to his mate on the other side of a fence so the tour moved on to Bucky, a babirusa pig from Indonesia with very prominent canine teeth that require regularly filing from his attentive keeper. After his meal some members were able to get a little closer and found that he was just as curious about us as they were of him.
A rather special inhabitant was next on the tour; walking through the back rooms in one of the pavilions members came to meet Asha, a 45 year old hornbill from Vietnam, she is completely blind, one of the oldest hornbills on record and very fond of humans, a fact that became very apparent from her reaction of bliss when petted. Compared to our denseness it is always a surprise to feel just how delicate and seemingly fragile birds are. This bird is almost all black with only a little white and the tips of the wing and tail feathers being yellow, but this yellow is actually “painted” on by Asha from a gland near her tail.
The tour continued from this very elderly bird to some of the youngest birds at the zoo, two month old African penguins. Aside from being enchanted by the constant chatter and waddling of the little birds members learnt that each penguin has its own distinct personality and that they continually delight their keepers with their individual quirks and displays of instinctual behaviour.
Aside from seeing some of the zoo’s animals being fed their meals members got the chance to observe a some of the local wildlife taking advantage of the rich pickings, and also a zoo keeper at “feeding time”.

The next creature to be introduced was no less exotic looking and certainly no less rare than the other species but a species native to Ontario, the Eastern fox snake. This is a beautiful fox coloured snake with black markings, which has sadly, amongst other threats such as habitat loss, been persecuted for its resemblance to the much more harmful rattlesnake. Members learnt a lot about the anatomy and some distinctive features of snakes, learning about the musculature and locomotion of snakes was particularly fascinating (and well worth looking up).
The final part of the tour ended with an array of containers on a lab table, invertebrate candy store to some, an array of torture apparatus for others. Not finding the first tarantula spectacular enough Tom opened a container holding the world’s second largest tarantula species, a surprisingly beautiful animal, a Brazilian salmon pink bird eating tarantula. This spider is probably too big to even see the “big” spiders that we find in our basements. It sat (or stood, what posture do spiders take?) calmly on it’s piece of cork bark while it was held up for everyone to get a good look at, the odd few willing enough to brave the potentially irritating urticating hairs were able to touch it’s surprisingly “velvety” abdomen. Following this was a range of other impressive arachnids, a stunning dark petrol blue Emperor Scorpion (apparently even more captivating under UV light and another of the world’s largest of its species), a whip scorpion and a whip spider. Some less threatening giant snails with their bizarre hydraulic eyes telescoping out from under their shells when introduced to some fresh lettuce, and fiery red stick insects.
After some much needed lunch and a little time to absorb the morning SONSI members were free to reap the full benefits of the group rate admission and spend the rest of the day wandering around the zoo. There is always something new to see at the zoo, of note this summer are the new rare white lions, a very playful young orangutan (I was lucky to see it perform three consecutive forward rolls in to a blanket), and a baby ring tailed lemur.
It is easy as an animal lover and scientific illustrator to say that there is so much more that can be learnt and understood about animals by meeting them, seeing their behaviours and quirks, and if you are very lucky, interacting with them. But this is probably true for many people who have felt a little more responsible for or caring towards animals that they have seen at zoos by seeing them acting in a familiar way to us, making eye contact or simply watching in awe. Aside from the enormous contributions made by zoos, and the Toronto Zoo is no exception, this is certainly one of the most positive impacts of a zoo and perhaps a very important one.
A huge thanks should to to Lori Dunn for arranging such a fantastic SONSI event, and also another enormous thanks should go to Tom Mason who’s passion and dedication is just so clear and quite infectious.