Battle of the Titans at RBG 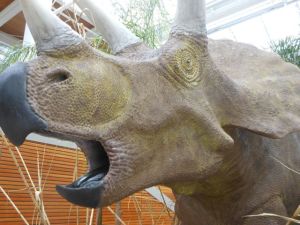 Many SONSI members will be able to recall visits to the Hall Train Studios for past events.  There is always something fascinating to look at some point in the transformation from concept to reality, though the destination is often far away.  This year the destination of one of Hall’s exhibits was a hop, skip and a jump away for many members in Burlington’s Royal Botanical Gardens.  Battle of the Titans is an exhibit focusing on two well loved titans; the Triceratops and Tyrannosaurus Rex. SONSI members gathered in larger than usual numbers for a tour of the exhibit by no other than Hall himself.  The exhibit opens through a relatively small entrance, flanked on either side by life sized models of the heads of T-Tops and T-Rex. This opens into a clear, bright, wide space. Following the hint at the entrance to pick a side, turning left of the entrance around the head of the T-Tops will acquaint you with this creature; walking around the right side of the gallery will bring you up to speed with the T-Rex. In the centre of the exhibit, the lower level is dominated by life sized replicas of the two, clashing. Each display area has a specific focus, from what was eaten and why, to what came back out and why that is important. There are really interesting interactive skulls demonstrating how each creature saw, wonderful images of their young and how they might have experienced their early lives, and even information on just how brainy they were. In keeping with the location of this exhibit there are specially selected plants all around the exhibit both living and fossilized, all of which were present during the era of these dinosaurs. The blood, gore, and horror of past impressions seem to be swept away with this exhibit, it feels fresh and engaging with current research and discoveries, told in videos of lively, prominent paleontologists throughout the exhibit. The result is an impression of two animals with relatable circumstances (such as the challenges they faced due to the changing climate), instincts and motives, not the other-worldly, blood-dripping-from-their-fangs monsters that have been the accepted image for so long.

A lot more could be said about this superb exhibit but I would like to finish with this anecdote. Right at the end of the day when the crowds were dispersing, I was revising the exhibit to absorb a little more of the information in the relative peace. Hall and Kathryn were busy making an adjustment to one of the displays (one focusing on the eyesight of the T-Tops). The casual passerby may not make anything of this sight, assuming that they were either members of the public vandalizing an exhibit, very nearsighted, or maintenance staff. But to those who had just attended the tour or know Hall and Kathryn, this sight would be completely in character with the sheer amount of work, passion, dedication and attention to detail that has been poured into this exhibit. I’m sure that no one would consider who designed the display units, filmed the video clips or wrote the display text, but this and everything else was undertaken by Hall and his team; it inspires a great appreciation and certainly a wonderful example to anyone following in their (not fossilized, clawed or even scaly) footsteps.

After a delightful lunch, SONSI members were invited to reconvene at the front entrance for another guided tour. This was to be conducted by Dr. David Galbraith, Head of Science at the RBG. Adorning the main entrance is a large, bells and whistles included, map of the RBG territory, and here the tour began with a concise history of the RBG. It is a very higgledy-piggledy history but this is due to the fact that the RBG is part of a rapidly changing area. From royalty, war, and independence, to trade, commerce and urban development, it has all contributed to the adaptable RBG that exists today. Continuing to the less public areas, the group was led to the herbarium; this one specifically houses about 60,000 species of plants from the RBG and surrounding areas. Like any organic or taxonomical collection, the specimens (rather like large decoupage projects, neatly glued to white card) are used for varied and varying reasons, from conservation and ecology to research and reference. Befitting the history of the RBG, the herbarium seems to have its own unique, haphazard history with links to soviet Russia and the Six Nations. Following the herbarium and past the first ever SONSI exhibit space was the library and archive (the non-living collections), which, like the herbarium, are in the process of being preserved (some diligent volunteers and staff have been scanning each herbarium specimen and removing all of the staples from every item in the archives) and made accessible for present and future visitors. These parts of the RBG make clear parallels with natural history museums and zoos, filling many different roles and responsibilities.  Much like the swan analogy (calm and resplendent above the surface, frantic below), there is a beautiful and informative display for the public and the many staff and volunteers working constantly for its survival, proving its relevance in modern society, and preserving its heritage and treasures.

The tour ended in the heavenly scented Mediterranean and cactus garden. The cactus garden is small but contains a great number of different species and expressions of cacti. It is somewhat like stepping into the bizarre, eerie, and uncomfortable world of a Salvador Dali painting, complete with spider’s webs. Contrastingly the Mediterranean garden with its petite Koi pond, large tumbling plants, and dry warm air was the perfect place to wind down and absorb the day.

A very large thank you should go to Dr. David Galbraith who graciously took the time to show SONSI members a varied, personal and interesting view of the RBG, and a glimpse at the world of botany. And a titanic thank you should go to Hall Train for everything he did to make this event possible, and for such an excellent tour.