Please join us for the Southern Ontario Nature and Science Illustrators’ 2013 Presentation Day.

When:  October 19, 2013, 10:45 AM to 5 PM. (Please arrive between 10:30 and 10:50 AM; the presentations will begin promptly at 11 AM).
Where: Production Room 2 at the Central Public Library at 120 Navy Street in Oakville, ON. Map
RSVP to sonsigroup@gmail.com (or to Emily) by October 15.
There is no fee for SONSI members. Non-members* are asked to reserve their seat by making a $15 donation to SONSI (to help cover the costs of facility rental and food) by credit card via PayPal (send it to sonsigroup@gmail.com). Space is limited! *Registration is open to non-members after October 1. Please note there are no refunds offered after October 11.

SONSI will provide lunch as well as modest refreshment for a short afternoon break.

Following the presentations, all are invited to convene at The Queen’s Head Pub for dinner (not provided by SONSI). Please indicate whether or not you intend to join us for this so appropriate reservations may be made. The Pub is a 5 minute walk from the Library. See the menu here. Map to pub.

Kathryn takes us on a brief but enjoyable historical tour of bird illustration, an art form that has fascinated artists and delighted viewers for literally thousands of years. Developments in bird illustration parallel the history of print and reproduction technologies.

Kathryn Chorney is a full time professor in the Illustration program at Sheridan College, Oakville, and an award-winning medical and scientific illustrator. She is a graduate of the University of Toronto’s Master of Science in Biomedical Communications program.

Lori will discuss the process and challenges of her scratchboard artwork and bring an example to show.

Lori Dunn is one of Canada’s primary scratchboard artists. These black and white engravings produce works with incredible realism and detail. With a B.Sc. in zoology, she has turned her background with science into a career in fine art.

—
Dino Pulerà
Illustrating the Neuroanatomy of the Great Hammerhead Shark

Dino will discuss the process he used for creating an illustration of the neuroanatomy of a hammerhead shark including research, references and technique.

Dino Pulerà earned his B. Sc. from the University of Toronto, and his MSc.BMC from the Division of Biomedical Communications (U of T). He works full time for Artery Studios, a medical legal & animation studio, as an associate art director and medical illustrator. His current freelance work includes the third edition of his co-authored book, The Dissection of Vertebrates. 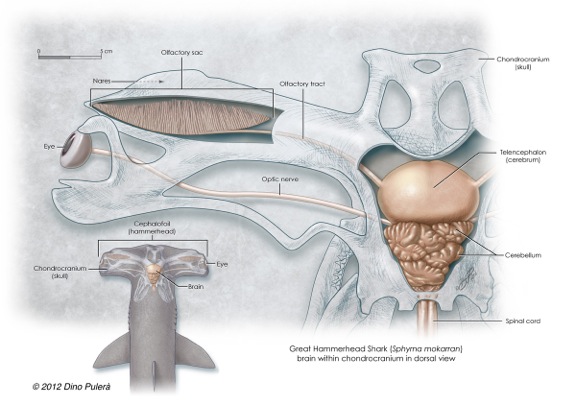 At three and a half years old, SONSI is in dire need of a logo to represent it. SONSI’s Logo Committee recently solicited sketches from members with the idea that one will be selected and refined to serve as our logo – a difficult prospect, given that SONSI members are a busy, diverse and keenly visual group of people. Elizabeth will present the discussions of the Logo Committee and at this time, SONSI members will vote on a logo design.

Elizabeth Pratt is SONSI’s Vice President and Secretary as well as Chairperson of the Logo Committee.

Emily will talk about some of the interpretive sign illustrations she has worked on over the last few years, including a reconstructed Neutral Nation village, turtle habitat in four seasons, and a little girl stepping in dog poo.

Emily Damstra has been a freelance illustrator for 13 years, exploring a diversity of subjects and projects along the way. She has an MFA degree in Science Illustration from the University of Michigan. 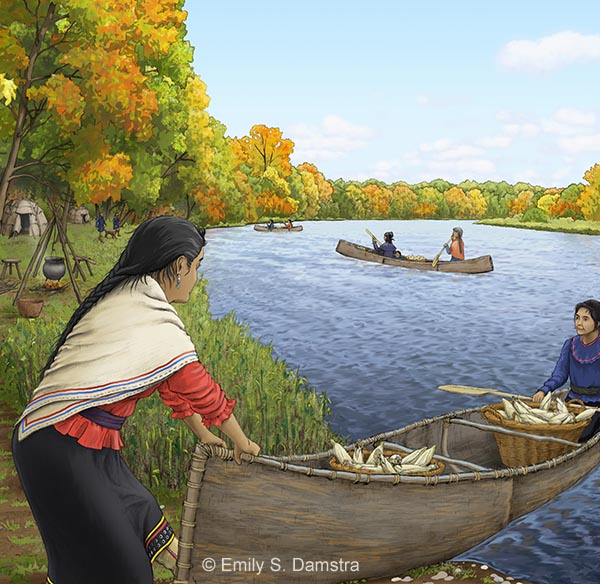 —
Hall Train
Anyone Can Draw a Dinosaur – But Should They Be Allowed To?

Hall Train presents some of his pet peeves in dinosaur depiction through the decades. Eyes, skin, colour, locomotion – we have the evidence, but why do so few artists use it?? Above all, an illustration should have some meaning, and not be just another picture of one dinosaur killing another.

Hall Train is one of the world’s most renowned illustrator/sculptor/animator/recreators of dinosaurs and other extinct life forms. Part of the secret of his success is analyzing what the real fossil evidence tells us – even if it comes as a surprise to some paleontologists!

Karen will discuss the process of creating a children’s book.

Karen Reczuch studied at Sheridan College and has been illustrating Canadian picture books for over 25 years, including the award-winning books “Salmon Creek” and “Loon.”

—
Kathryn Killackey
Reconstructing the Past: Archaeological Illustration at Çatalhöyük

Archaeological illustrators draw on many different skills and disciplines to create engaging and scientifically accurate reconstructions of the past. Kathryn will discuss her experiences with the reconstruction process using examples from Çatalhöyük, a 9000 year old Neolithic site in Turkey.

Kathryn Killackey is a science illustrator with extensive experience illustrating archaeological subjects from a range of time periods and geographic areas. She has been the project illustrator for the Çatalhöyük Research Project for the past 7 years.

—
Marianne Collins
The Art of fact: Illustrating the Creatures of the Burgess Shale

Marianne will demonstrate an evolution of the illustration techniques used to create reconstructions of over 75 fossilized Cambrian species. Demonstrated techniques range from pen and ink at the beginning of a pre-computer timeline to digital art in the present. The process of getting from the fossil to the animal reconstructed in life will also be explored.

Marianne Collins first became acquainted with the 500 million year old fossils while employed as staff artist at the Royal Ontario Museum. Marianne is now internationally known for unlocking previously unknown creatures from thin slabs of Burgess Shale and bringing them to life in her reconstructions. Does that make her a Rock Star?

Jacqueline will discuss an ongoing project for the Shanghai Museum of Natural History, and the challenges of working with clients abroad.

Jacqueline Mahannah is a Medical and biological Illustration graduate of the University of Michigan, currently living in Sarnia Ontario. She is both a freelance science illustrator and a busy mom of two young boys.