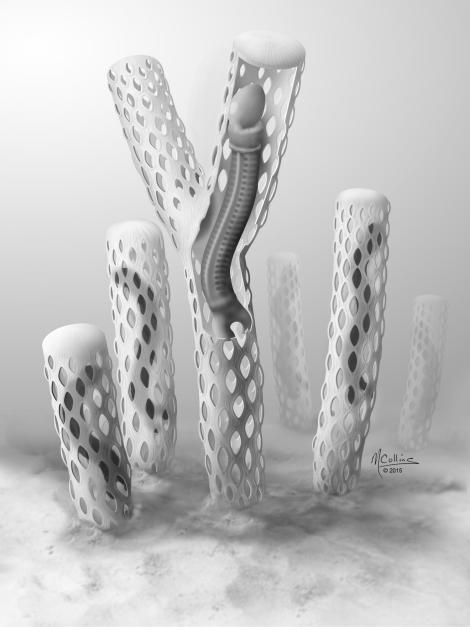 About the illustration and the fossil it depicts, Marianne says:

“It is rewarding work, collaborating with researchers who are filling in the story of the history of life on earth. The latest information from the ROM’s new fossil site have redefined the description of 2 previously known but poorly understood species from the 500+ million year Burgess Shale fossil formation. I made the illustration after first creating a scale model to work out the 3D structure.

Margaretia, a tree-shaped structure from the Burgess Shale has previously been classified as a type of algae, first as flat and bladelike then tube-like with perforations along its length. Oesia are very rare worm-like fossils that until now were of unknown affinity. Both fossils have long been known from the Burgess Shale but the ROM’s new site in Kootenay National Park’s, Marble Canyon has been turning up new  information. Marble Canyon is one of the most recently discovered fossil localities in the Burgess Shale geological formation known for its exceptional quality of fossil preservation. The specimens from Marble Canyon are far more abundant and even better preserved, giving us unprecedented details on both species. Researchers at the ROM have concluded from the new fossils that the direct association with Oesia shows that Margaretia was not a seaweed at all, but rather a perforated tube-like structure that the worm probably created and inhabited. And the worm Oesia, is clearly a primitive hemichordate known as acorn worms that still live in our oceans today. The hemichordate group of organisms belong to a larger group that leads to vertebrates including humans. By studying these early life-forms, researchers hope to identify a distant common ancestry with humans and so trace our lineage all the way back to the Cambrian. “