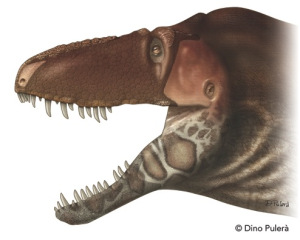 SONSI member Dino Pulerà recently had an opportunity to be involved in the recreation of a unique dinosaur. In his own words:

Spring time this year not only marked the arrival of a new season but also the announcement of a new dinosaur. In 2015, Thomas Carr, a good friend and world leading expert on Tyrannosaurs, asked if I would help him and his international team of scientists draft an illustration that would recreate the life appearance of an older cousin of T. rex. This new meat-eating dinosaur was christened Daspletosaurus horneri, Horner’s frightful lizard. What made this research somewhat controversial was the way these beautifully preserved fossils were interpreted.  The roughened texture of the facial bones and lower jaw combined with the presence of a multitude of holes that once served as portals for nerves and blood vessels for the soft tissue covering the face were very similar in appearance, and probably function, to what is observed in modern crocodylians. The inference Thomas and his team made was that D. horneri may have had a lipless face shrink-wrapped with large flat scales. In addition, some of the scales along the margins of the mouth may have had exceptionally sensitive faces, also like crocodilians. The research team hypothesized that D. horneri had sort of a ‘sixth sense’ that may have been beneficial in hunting, object manipulation, safely handling hatchlings, and courtship. This research has received international media attention, including a healthy dose of skepticism (from social media) as expected with unconventional new ideas. Since this is the first hypothesis proposed to show the facial integument of tyrannosaurs, I am thrilled to have been the first person to bring this awesome new vision to life!

If you’d like to read more about this discovery, here are a couple of good summaries: